If It's Not One Thing,
It's Your Mother!

Premiering on Mother’s Day weekend, this heartwarming theatrical work celebrating mothers and their children, was co-written by Margaret Shaw Johnson and Frances Edstrom. The play tells the stories of three historical 20th century women who bravely navigated the challenging waters of motherhood after World War 2. Although their struggles were different, they represented challenges that many women faced at the time. Helen left home at age 12 to continue her education beyond the 6th grade. Sylvia had to fight the educational system to remain employed as a teacher after she married and had children. And Mugs graduated from college and then joined the WAVES, becoming a code breaker during the war. She eventually married and raised six children, one of them with a disability, while going on to earn her master’s degree and becoming a reading specialist. The stories of these extraordinary women play out through their relationships with their daughters who love them and support them through the struggles of old age. As those daughters go on to raise their own children, they are fortified by the examples set by their wise, humorous, and resilient mothers.

If It’s Not One Thing, It’s Your Mother, was performed to sold out crowds at four performances at the Valencia Arts Center in Winona, Minnesota. It was a gift to the community, with all gate proceeds donated to two charities: The Family and Children’s Center, and the Sandbar Storytelling Festival. This was made possible by contributions made by the Elizabeth Callender King Foundation, the Dare Lamberton White and William F. White Foundation, WNB Financial, the Winona Post, River Arts Alliance, and the Frozen River Film Festival. 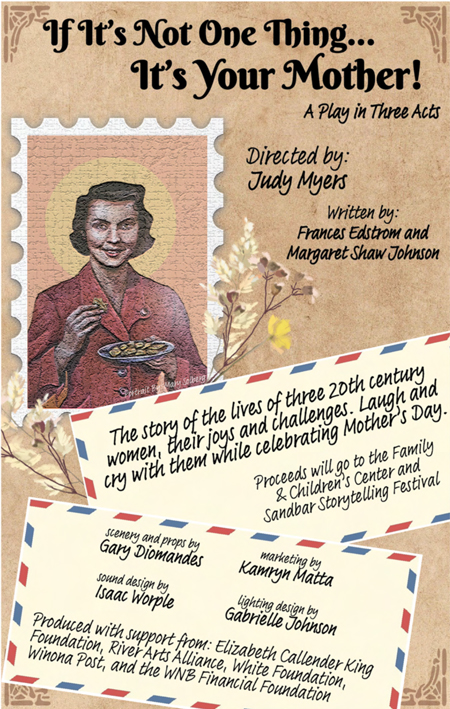 Cast in Order of Appearance:

A Small Sampling of Audience Feedback

“. . . it was so wonderful! I miss my Mom every day and this was a wonderful tribute to all of our Moms.”

“Just got home from the play! You did a great job We . . . laughed and got teary eyed! Thanks for a great evening!”

And, From the President And CEO of the Family and Children’s Center:

“I wanted to reach out and write a brief not to thank you for considering Family and Children’s Center as a beneficiary of some of the play proceeds. I was at the performance yesterday and did not see you on the way out to tell you how moved I was with the play. Honestly, I thought it was exceptional. It brought tears to my eyes at the end, reminding me of my own Mom who died in 2016. I miss her every day. Thank you so very much . . . the play was beautifully done.”